SAVED BY THE BELL – Book Forward By Carol Hrdlicka

SAVED BY THE BELL – Book Forward By Carol Hrdlicka 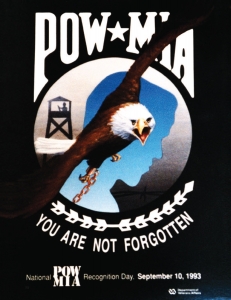 I have known Arnold Beizer, the author of ‘Saved By The Bell’ since the early 1990’s when he promoted a celebrity charity benefit concert for POW/MIA family members. The event held at the Philadelphia Academy of Music was attended by Muhammad Ali and sponsored through Arnie’s non-profit organization, Let Freedom Ring, Inc. which donated proceeds to POW/MIA family organizations. A mutual friend introduced me to Arnie and since that time we have been friends and have worked together to shed light on the abandonment of the POWs. In 1994 Arnie arranged a trip for Muhammad Ali to accompany me and another POW family member to Vietnam to seek answers about my husband David, who is one of a group of 321 American servicemen “Last Known Alive” in captivity.
It was on May 18th, 1965 that David’s F-105 jet plane was shot down over Laos. David was seen to bail out and land safely. He was photographed in captivity by the Pathet Lao and was extensively documented as a Prisoner of War over a long period of time. The Defense Intelligence Agency (DIA) includes him on their ‘Last Known Alive’ list and he is termed a “discrepancy case” because he has yet to be accounted for even though the USG consistently puts out the misinformation that he died in captivity.
It was thought that David would be returned in 1973 during Operation Homecoming when the North Vietnamese released 591 of his fellow POWs. There is documentation of Henry Kissinger speaking later that summer about David’s imprisonment, so the question remains as to why he wasn’t brought home? His whereabouts were being tracked for years, well into his second decade of imprisonment, but somehow the politics of repatriation kept getting in the way. There have been live sighting reports of David through the 1990’s, satellite reconnaissance photos of POW authenticator codes from POW messages stamped in the fields of S.E. Asia as well as other first hand accounts of live POWs seen to this day.
I have been admonished by government officials from the start for pursuing information of my husband’s captivity. I was requested by our government to keep quiet for his sake and safety, followed by strings of half-truths and even outright lies over the years. I believe the DIA hoped I would give up and go away. I was passed down the line of bureaucracy; my requests for documents and concerns about my husband’s whereabouts were ignored. While I am well beyond the argument of whether the U.S. should have been involved in the conflict of S.E. Asia, the lessons learned should not allow those in power to expect the American people to blindly believe what they want us to believe. To be true to the soldiers and their memory, as well as to ourselves, we must expect proof of what the government tells us and accept nothing less.
Col. David Hrdlicka chose to serve as a U.S. Air Force fighter pilot and did so with honor. He and his family still serve. His toddler children have grown to adulthood. They have all wondered, for every day of those 46 years, is he still alive….as they eat, sleep and breathe, they ask themselves, is he hurting, is he hungry, is he wondering where we are and if we’ve forgotten him?
My family does not seek sympathy and certainly doesn’t want public pity, we want the truth. David’s story is no more special than that of the thousands of other servicemen and women who have given their lives for America’s freedom. They each have their own unique story. The circumstances are all as different as the individuals involved but the outcome is the same. I am indebted to Arnie Beizer and Muhammad Ali for championing the cause of freedom and for helping U.S. get to the truth about American POWs and MIAs who served their country in the Vietnam War and were left in captivity.
Some Still Survive! SAVED BY THE BELL tells their story and how Muhammad Ali has helped to bring light to their plight and to bring them home. Muhammad Ali is truly the Peoples’ Champ for his service to others.
~ Carol Hrdlicka