SAVED BY THE BELL – Book Preface

SAVED BY THE BELL – Book Preface 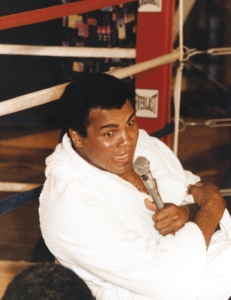 Like the legendary Babe Ruth who challenged the pitcher and an entire Chicago Cubs 1932 World Series team when he pointed to center field predicting that he would hit a home run there on the next pitch and then delivered on his promise, Muhammad Ali told the world he was the greatest and then proved it. He resurrected the sport of boxing, but more importantly, came into the lives of people who had nothing to cheer about and gave them hope. He provided not only thrills and chills, but uplifted their spirits. He demonstrated to us that with skill, dedication and perseverance, we too could accomplish almost anything. He challenged every one of us to be confident. Never should we give up in our pursuit to succeed.
Some try to copy his style or to mimic him, but there will never be another Ali. He is a unique person, one of a kind. But that is not to say that each one of us can’t have a little Muhammad Ali in us. The lesson of Muhammad Ali is that if we try hard enough, if we have faith and confidence in ourselves and trust in God we too can be winners. We may not all achieve the fame and glory on the scale of a Muhammad Ali, but at least we will have self-esteem and self-respect and the satisfaction of knowing that we have done our best.
The lesson we should remember is the one Jesus taught. Jesus said,

“I say unto you, He that believeth on me,
the works that I do shall he do also; and
greater works than these shall he do.”
“…with God all things are possible.”

Many words have been written about the life of Muhammad Ali – the champion boxer. He has been referred to as the “greatest of all times,” a loud mouth, a braggart, a clown. These impressions, however, based upon and formulated by newspaper accounts, stories of editorialists and sports writers are fragmentary at best. Our image of Muhammad Ali has largely been created by newspaper headlines and TV interviews with sportscasters such as Howard Cosell. But who is the real Ali? This book will explore the real Ali… the Peoples’ Champ.
Ali once lectured about the reason he wanted to win the Championship of the World. He said it was a podium to achieve his mission, especially to young people. In Ali’s own words, “Crime is increasing, jobs are scarce and kids give up too easily.” Ali wanted to show that you can win.

You can accomplish anything you set your mind to. “Just don’t give up! Go back to school. Get a job. Don’t quit, don’t take drugs and don’t drop out. Never say you can’t. When they say you can’t to me, I try harder. By being a Champion, people will look up to me and listen and maybe some of them will succeed.”

Ali, a promoter’s dream, was a true sportsman and entertainer supreme all rolled into one. He was a genius at selling himself and at selling out millions of seats. He sensed what the people wanted and then gave it to them. There was a method to his madness. The method/message will be revealed in the “rounds” that follow.