FIND OUT THE FACTS IN “SAVED BY THE BELL” – A new book about American POWs Abandoned and the fight to bring them home. Read aboutMuhammad Ali and POW Family members championing the cause of freedom for American POWs/MIAs.

It is time to salute our Flag and remember our POWs/MIAs who served US with valor and distinction. But some were left behind contrary to what President Obama, his Secretary of Defense and his new National Security Advisor, Susan Rice just told US.

In case you missed it, President Obama on 6/1/14 appeared in the White House Rose Garden. Obama said, “The United States of America does not ever leave our men and women in uniform behind.” Incorrect, American POWs were left behind after the Vietnam War ended and Some Still Survive! All Americans owe a debt of the nation to these valiant men, abandoned for political expediency and “Peace with Honor” after the Vietnam War. We The People cannot close our eyes to the truth or celebrate until we bring all our men home.

What has our government done to bring home POWs from the Vietnam War? Not enough! See mysteries unfold and secrets told with amazing truths and exclusive stories in “Saved By The Bell.” Great new photos are included of Muhammad Ali and heartwarming stories bring tears and laughs. Formerly Classified Government documents and photos tell the real story covered up in the press that has written off this sad chapter in American history along with a government that has failed its servicemen, veterans and POWs in a major way…No, it is not the time to bypass the Truth but to correct the errors of the past! 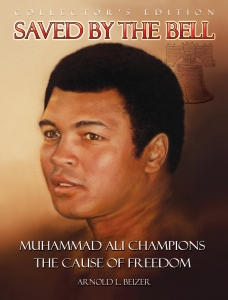 SAVED BY THE BELL is about the Bell tolling for our nation and POWs and a World Heavyweight Champion who was and still is, in spirit fighting for and with POWMIA families. Read the exclusive story about Muhammad Ali’s trip to Vietnam to help bring the POWs home. Don’t let Flag Daypass until you join the fight so that all our POWs return home. Will the Champ be miraculously healed and speak again like the “Louisville Lip” with a poem and a quip?

Find Out in SAVED BY THE BELL