Saved by the Bell book creator 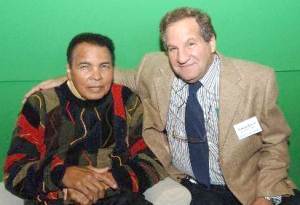 Arnold L. Beizer, originally from Hartford, Connecticut first met Muhammad Ali in 1963 when he was known as Cassius Clay. A devoted fan, Arnie followed Ali’s career from the early days when he became the Light Heavyweight Olympic Boxing Champion in 1960. Arnie grew up in Hartford, Connecticut and played sports in high school and at Boston University. He served in the United States Army Reserves during the Vietnam War era and then returned home to Connecticut and attended law school. Shortly thereafter, he established his own private practice and always maintained his enthusiasm for sports – especially boxing.
The author sensed that Cassius Clay would not only become a superstar but would leave an indelible imprint on society writing a chapter in history that would be an object lesson for generations to follow. Over the years, Arnie got to know Ali and to notice the many special qualities and attributes of character that distinguished the Champ from other athletes and celebrities and that made him stand head and shoulders above the rest. Muhammad Ali was not just a talented and super athlete, more importantly he was an extraordinary human being, a humanitarian, and a missionary of sorts. Ali was a man on a mission destined for greatness inside and outside of the boxing ring.

There was a spiritual component to Ali that went far beyond the obvious fame for which most people came to know him. Arnie kept in contact with Ali while a college student, a young adult and then a businessman. Periodically, the two of them would meet when Ali was on the road traveling in New York City or appearing in Hartford, Los Angeles, Newark, Providence, Deer Lake, Pennsylvania (the Champ’s training camp) or at the Champ’s home in Berrien Springs, Michigan.
During the time Arnie spent in Ali’s presence, he learned a great deal from the Champ and about Ali the person. The spiritual side of Ali impressed Arnie the most. It was this aspect of Ali the special man – the real Ali – that the author hopes will come out in the pages of his book. In this life, we only come around once. As the adage goes, “What goes around comes around.” So, let us examine the twelve rounds of Saved By The Bell and see how Ali comes through. Many have had the opportunity to follow Ali’s boxing career, and some the good fortune to watch him demonstrate his skills in the ring. The author hopes that through the pages of this book others will now have a chance to see the spiritual side of Ali in action. Ali certainly had a way with words, but actions speak louder than words. So let’s get ready to rumble in Round 1.